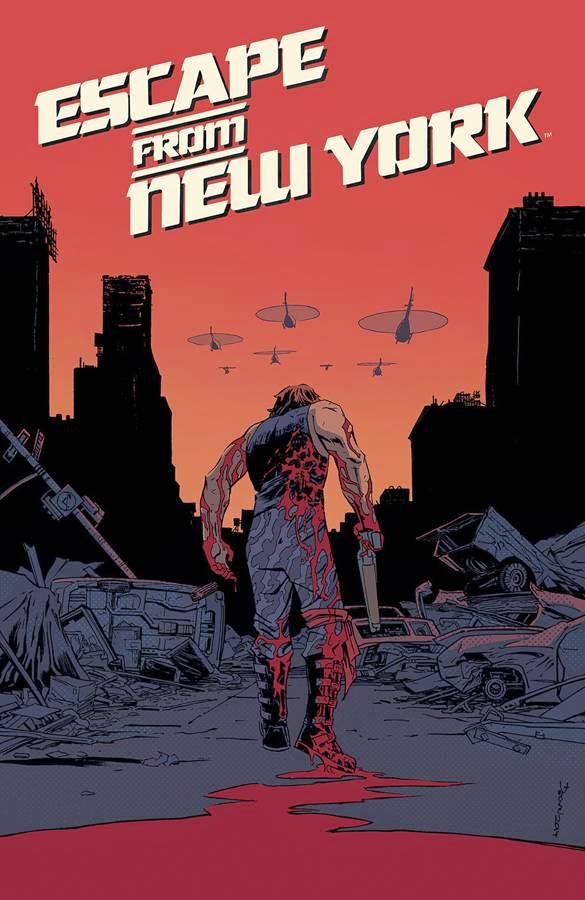 One of my favorite movies growing up was John Carpenters Escape from NY. I thought the whole concept of a futuristic United States was both scary and fantastic. The best part of the film was the lead character Snake Plissken, gritty, mean , tricked by the government (they do that), but a hero none the less.
Snake has appeared in comics before to mixed reviews but there has not been a comic based on the original movie. This series takes place shortly after the events of Escape from NY. Snake has saved the President but then humiliated him in front of the world so he is again a wanted man.

Written by Christopher Sebela, art by Diego Barreto and cover by Declan Shalvey (who we recently meet at NYCC). Escape from NY is set to follow in the success of John Carpenters Big Trouble in Little China series at BOOM! Comics, 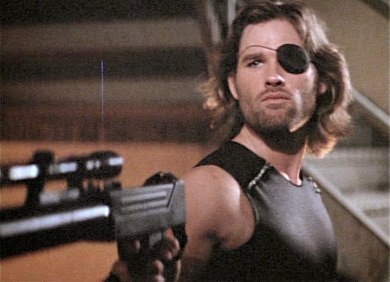 Hopefully the series will lead right into Escape from Cleveland, that was Snakes second adventure mentioned in Escape from LA but never detailed. One can always hope.

Good Luck on your Hunt!
Posted by NY Crush at 4:17 AM No comments: 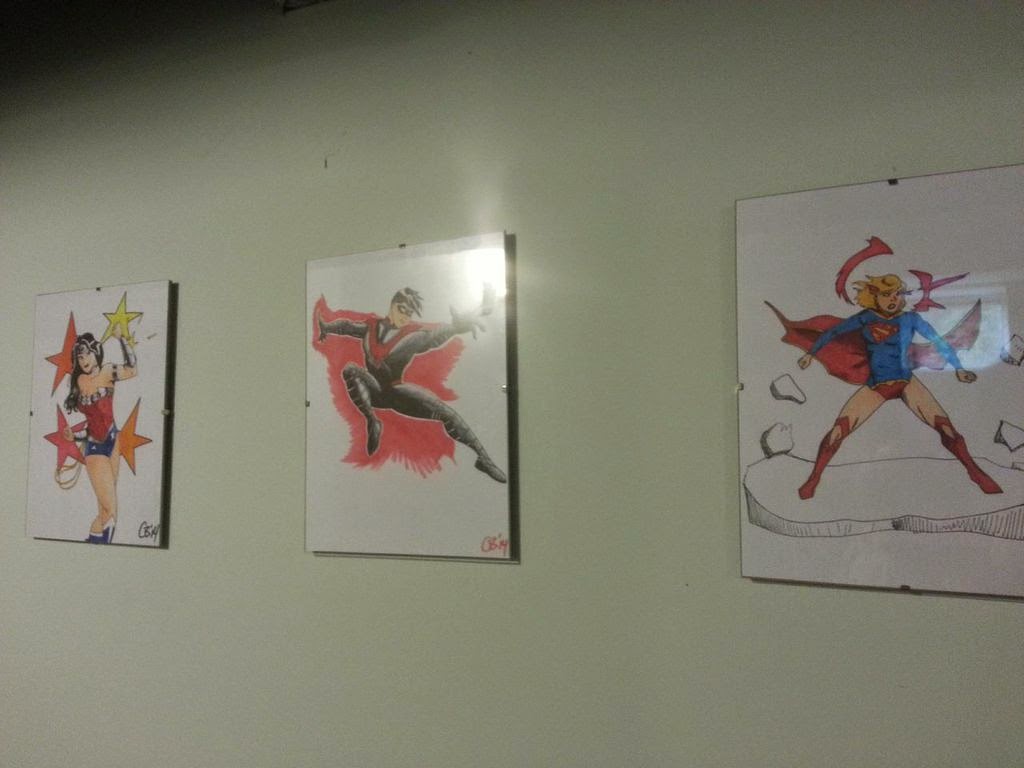 This is our first installment of our new regular post that showcases collectors. Wether it is a collections, a memorable hunting trip,or the great success we will be sharing it here.

Our first collectors showcase star is Chris Barnes and as the title says Chris is an artist, a blogger and a collector. You can view his blog themightychrispy.blogspot.ca.


Now here is his story: 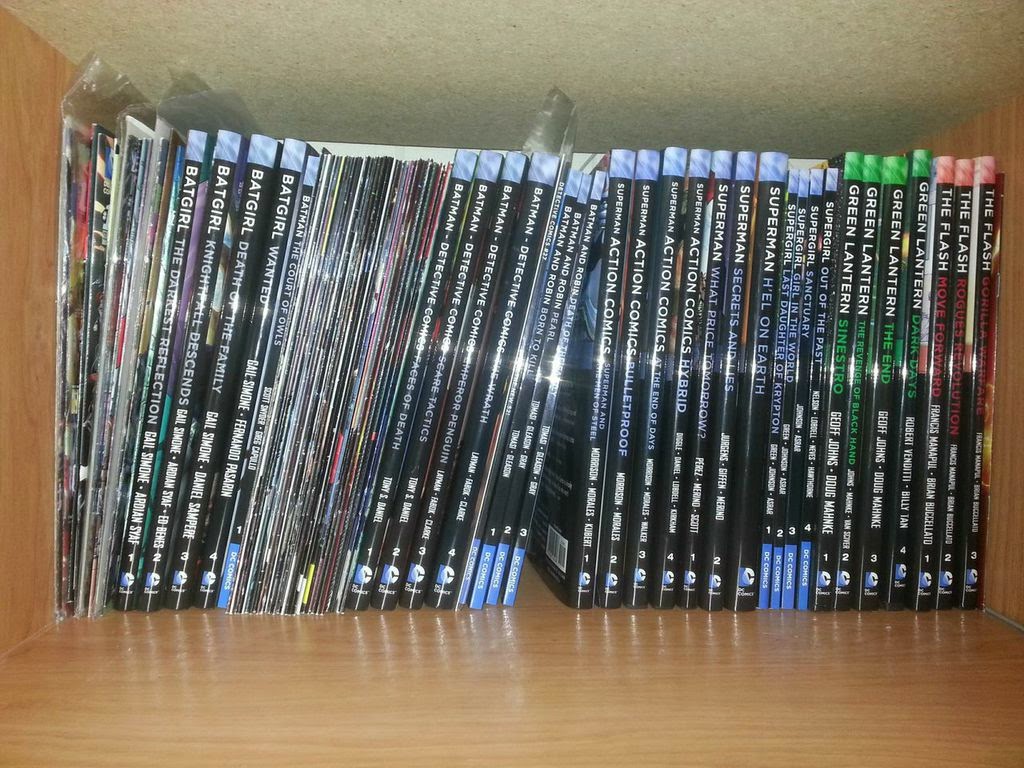 My first trip to go get a comic was back when I was in University in 1998 in Toronto, Ontario (I did have a few previously, The Untold Legend of the Batman is the only one that comes to mind though, and I got that through book order in Elementary School).  On a recommendation from my friend Matt I picked up Kingdom Come.  I loved it and at the time I decided I was going to pick up some other books from Silver Snail.  I got a whole pile of Nightwing books, that Included A Knight in Bludhaven and Rough Justice, collections of the first books of the series and then just single issues to continue the stories.  I got most of the issues up to 35 or so but the store here in Peterborough, Jeff's Cards and Comics, was kinda sucky and not very welcoming and so I stopped going in.  After that there was a long break, maybe ten years.  I started to peek into the graphic novel section at Chapters and I would pick up books that looked interesting to me, usually Batman.  Titles like Hush and All Star Batman and Robin, Batman/Superman was something I picked up once in a while too, but when I got wind of the New 52 relaunch in 2011 I knew I wanted in!  Especially once I saw some of the sample art!  Greg Capullo, Francis Manapul, Jim Lee, and Cliff Chaing!  I was stunned, I called up DC and got a subscription to Batman and Nightwing right away, I wanted each issue!  I picked up a few of the #1 issues, Justice League, Detective comics (which I now have signed by Tony Daniel!) Action Comics.  To collect the other books I have taken to ordering the volumes from Chapters, it's much cheaper, and makes for a more organized display of the titles.  When I go get comics weekly now I go to Dixon's Books in Peterborough which is most a used book store, but it has a large selection of comics.

I've read most of the books I have at least a couple of times, usually when a new volume comes out I'll at least skim over the past ones to refresh my memory of the story to that point.

As for things other than comics I have the usual five Justice League members as toys (except for Flash) but I have the Art FX statues of Flash, Supergirl and Nightwing, the later two of which just came in the mail yesterday! 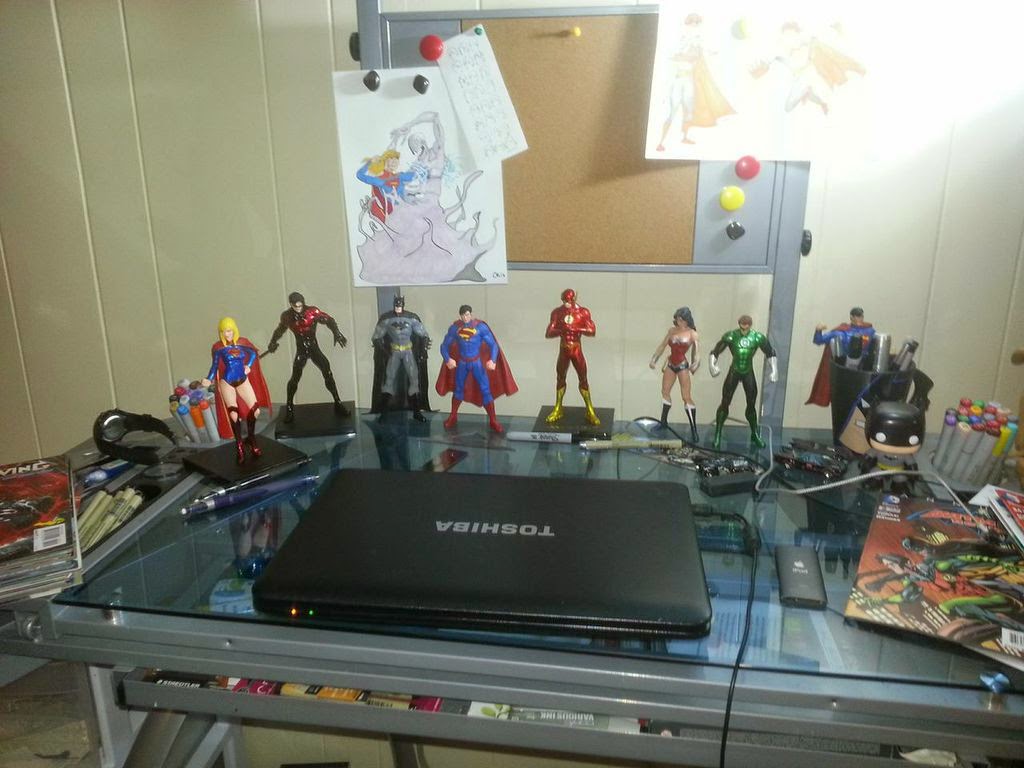 I have pretty much all the animated films and have been a huge fan of Batman The Animated Series since it's debut in 1992 (up in Canada anyways) I think that show is what really made me a Batman fan. 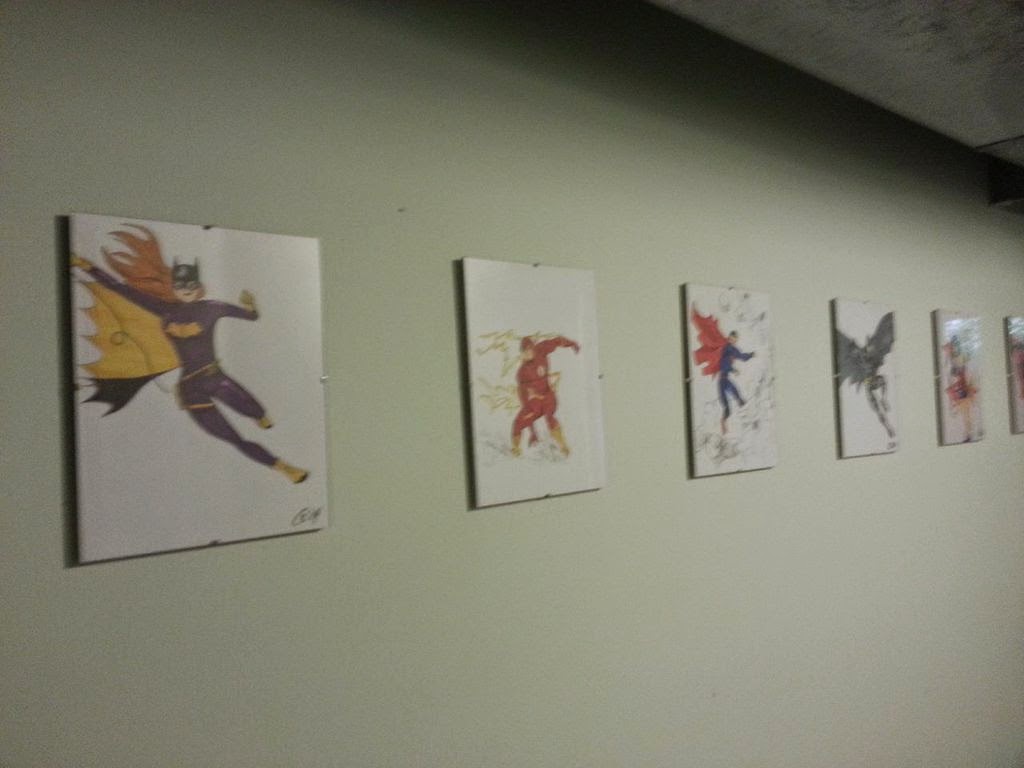 I have my own art up in my hallway, the Hallways of Heroes I call it, I want to put villains up on the other side, I just have to get them done.  I have done a few commissions for friends, most of those can be seen on my blog themightychrispy.blogspot.ca I have videos of me drawing as well I am posting up comics that I have both written and drawn. 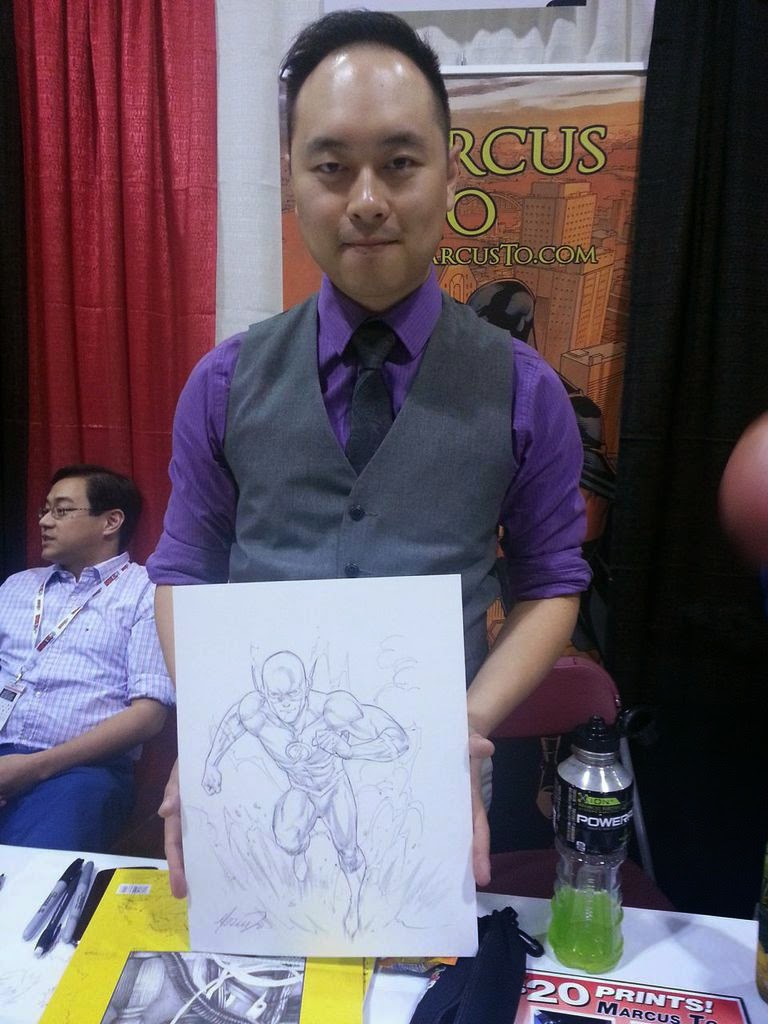 I would say the best parts of my collection though is that I have a number of commissions from Fan EXPO and Comic-Con in Toronto.  My first commission was by Marcus To and I got him to draw the Flash for me, it's really cool and hangs up in my living room.  I have two headshots of Superman and Wonder Woman by Ken Lashly.  By far my favourite though is the Batman I have by Francis Manapul that hangs in the upstairs hallway.  All told that artwork, as assessed by Comic Book Addiction in Oshawa is worth about $1300! 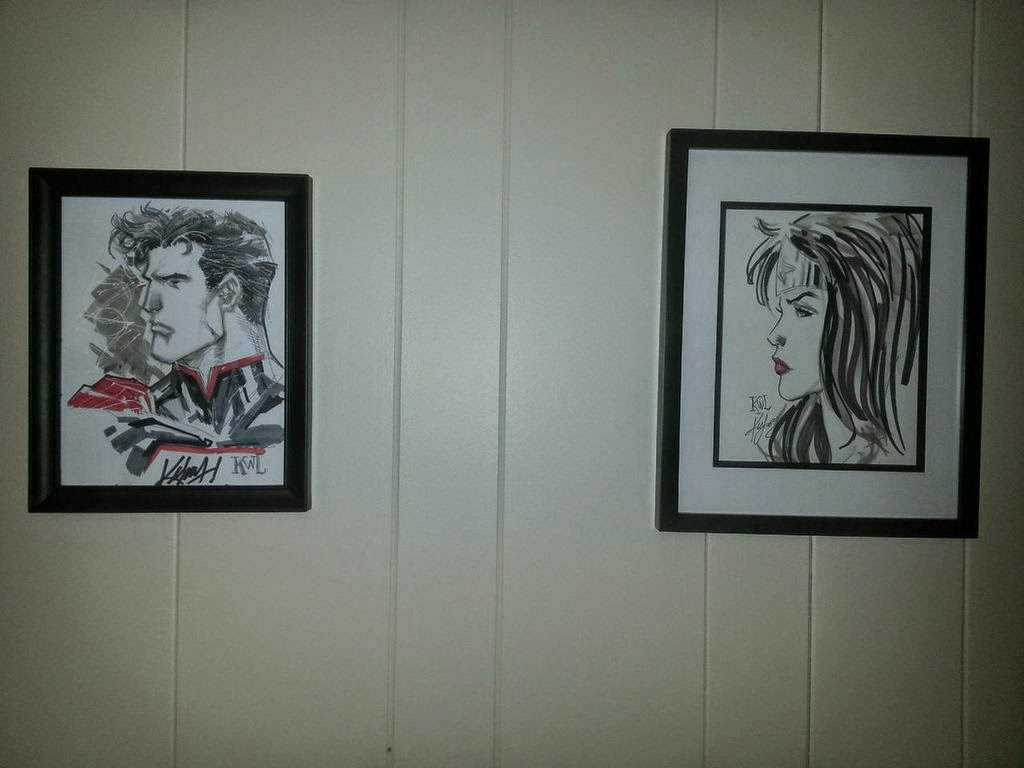 I think that about covers it, if you have any specific questions, or something you'd like clarification on or want me to expand on further just let me kno
Posted by NY Crush at 4:15 PM No comments:

Action Comics #1 on display at NYCC 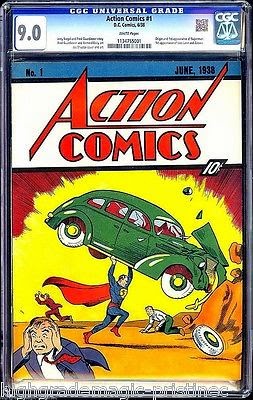 This past weekend at New York Comic Con the copy of Action Comics #1 was on display in the main area.the comic sold on EBay for over $3 million. You can read about it at eBay copy.
This comic was purchased by Metropolis Comics owners  Vincent Zurzolo and Stephen Fishler. It is the world’s most expensive comic book. They willit with a host of other rare comics at he Comic Connect.

During the convention I actually ran into the owner who sold the copy of Action Comics #1 Pristine Comics’ Darren Adam. He explained how happy he was to sell the comic and how he and his wife celebrated with a nice bottle of wine. What was he doing at Comic Con you might ask, well buying more comics of course. A true hunter and a gentleman.
It was a nice discussion with a true fan and collecting legend,

So many things make NYCC great.

Good luck on your hunt!
Posted by NY Crush at 4:50 PM No comments: 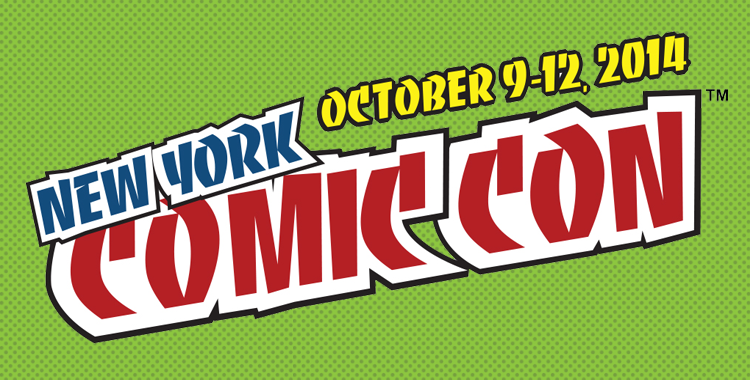 There are so many things that can be categorized as the best part of New York Comic Con, the great costumes, the friendly vendors, the artists, the exclusives, the panels but all of this can be summed up in two words, The People.

From those that attend to show off their cosplay skills(my kids), to those that truly go to buy comics (that's me), the whole weekend is a great experience and the people make it possible.

This year we went on Sunday, which is kids day, for the first time. It was great to see so many children getting into collecting. It is a really great way to get the next generation into our wonderful hobby. I saw families dressed altogether as a theme, such as KiSS and the Teenage Mutant Ninja Turtles. This is a day for families to share in the fun, and it really does work. If you can find one thing that you can share with your kids for many years to come, do it. One of the best things we saw was a young boy in a wheel chair in costume as Optimus Prime, AWESOME would be the best way to describe it.

People and Families are what make NYCC great. See everyone there next year. 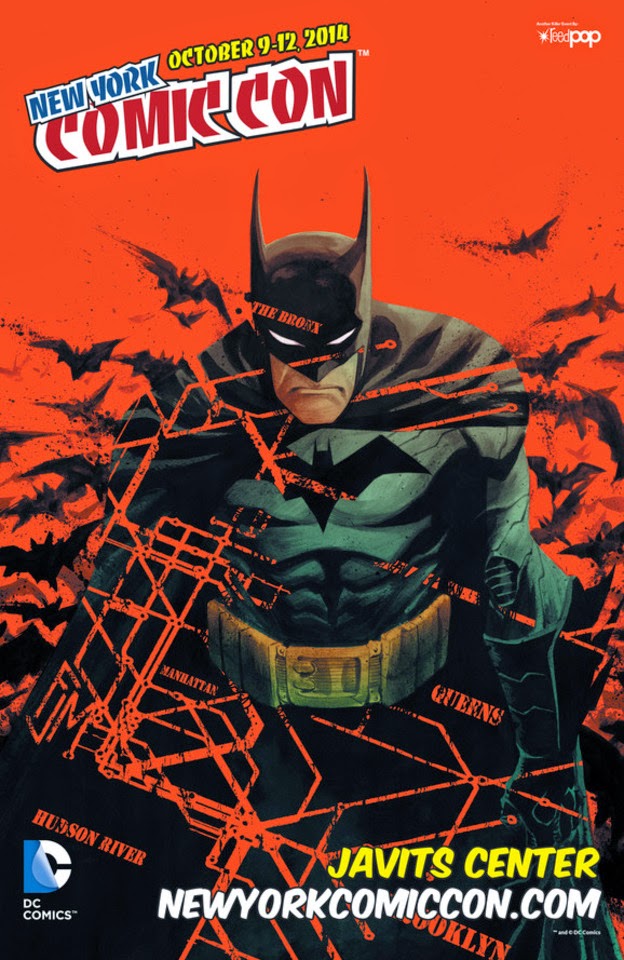 Over the next week I will be posting about our Comic Con success, so keep coming back for more.
Posted by NY Crush at 7:59 AM No comments: 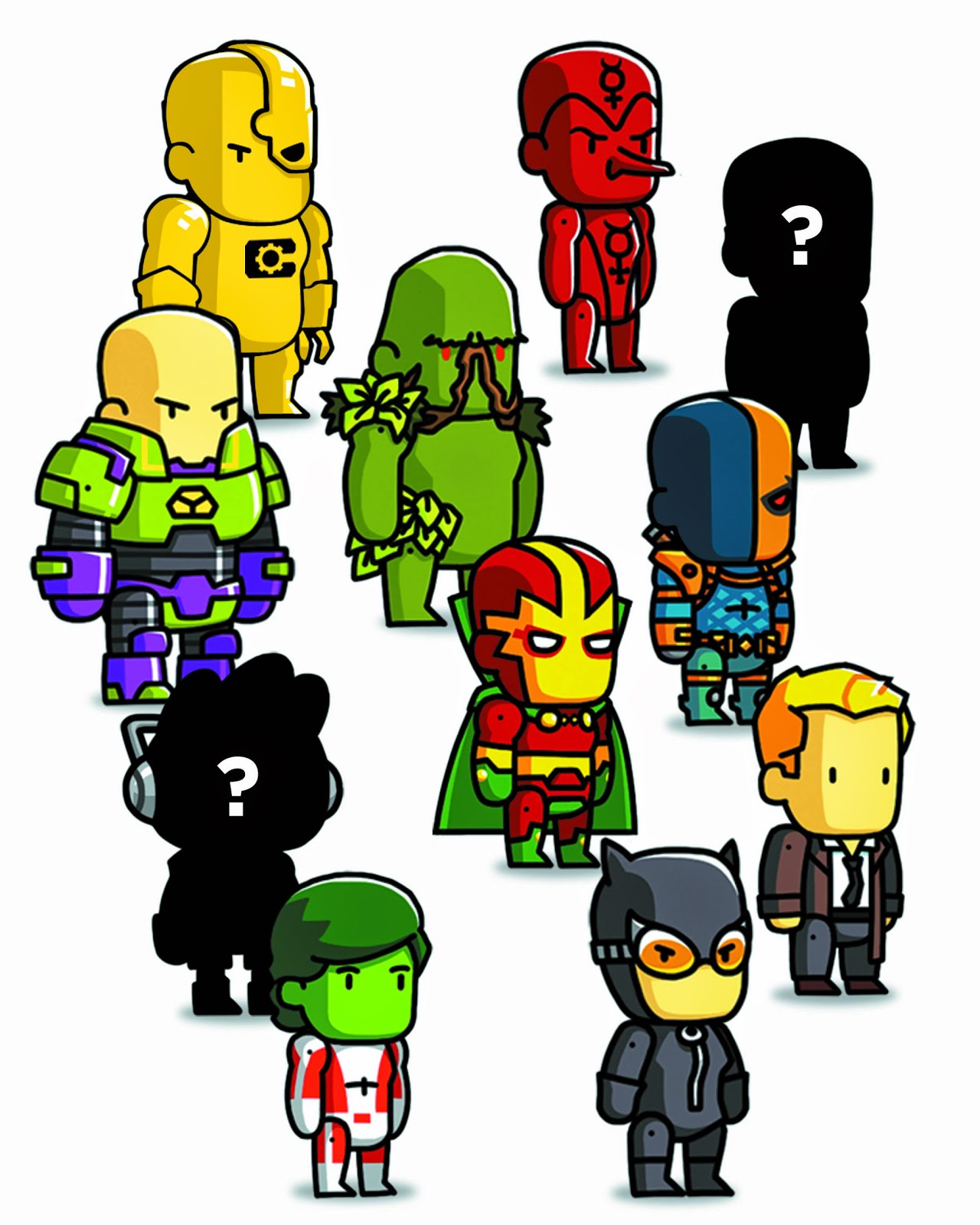 The DC comics Scribblenauts line has become very popular and the more popular it gets the more likely we are to see obscure characters.
In the fourth series you will find, if your lucky, a Beast Boy figure, or Swampthing, yes Swampthing.
This assortment also includes one of my favorite characters who doesn't get the respect he deserves, of course I'm talking about Darkseids favorite son, Mister Miracle. Rounding the fourth series out is Constantine, Cat Woman, Lex Luther ( still waiting in the Sex Luthor figure), Deathstroke, and Metal Men Gold and Mercury.

This next bunch in the Scibblenauts line hits selves this week, so get to hunting folks.

Good Luck on Your Hunt!
Posted by NY Crush at 7:20 AM No comments:

We are back up and running!!!!

Had some difficultly posting the last couple of weeks but we are back and we are ready to continue our hunting stories and comic book related news!

We missed you to.
Posted by NY Crush at 7:05 AM No comments: