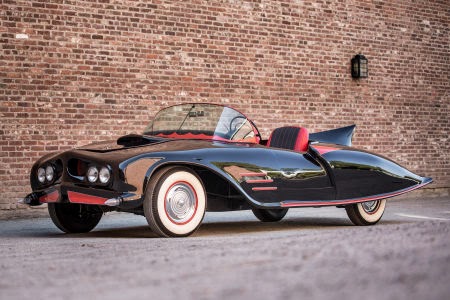 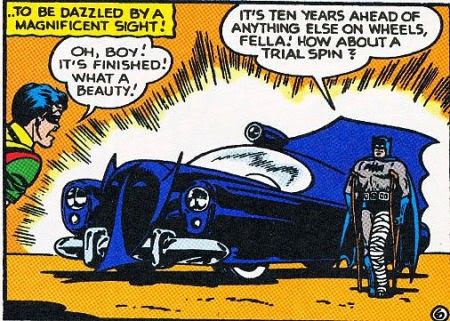 This customs made Batmobile was created based on the 1940's comic book version of the iconic car.  It includes the prominent front-end bat-nose and rear-end single fin.

The "63 Batmobile"  started as a 1956 Oldsmobile 88 frame and the famous 324 Rocket engine. The body was replaced by Robinson with his custom-designed body, measuring 17 feet by 83 inches, sporting the Batmobile's iconic dorsal fin, bat-nose front end and pocket sliding doors.
Initially Robinson had his car masterpiece painted silver but once Batmania hit the country DC comics license leased it for a promotional campaign. It was then reprinted to mirror the iconic Batmobile, along with official Batman labels. The car then toured the United States.

Forrest, who needed cash to start a fabricating business, sold the car for $200. Within a few years, the car lay abandoned in a New Hampshire field and, for almost fifty years, remained a long-forgotten piece of American Pop Culture.

In 2008, the car was discovered by Bobby Smith of Swanzey, NH. A recent buyer did some research and tracked down the two builders of the car, Robinson and Perham. The pair was reunited with their long forgotten masterpiece. 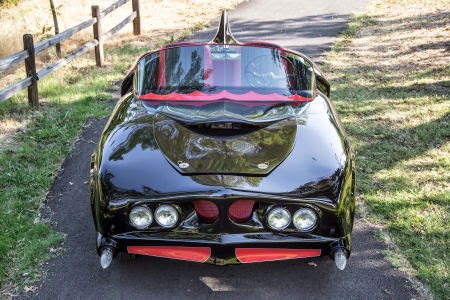 Now you can own this automotive work of art. You can bid on the "63 Batmobile" at Heritage Auction.

This is a very unique piece of comicbook history so if you have the means to purchase it get on that.

Good luck in all your hunting.
Posted by NY Crush at 5:18 AM