Why you should read The Unbeatable Squirrel Girl 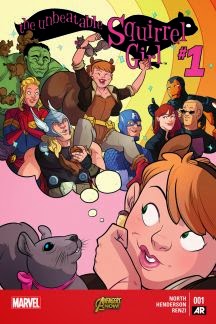 The shelves at your local comic shop are packed with comic titles, your weekly purchases probably contain some of the major titles from DC and Marvel, maybe even the Walking Dead. This post is about why you should be buying The Unbeatable Squirrel Girl, and yes I bought my copy already.
Doreen Green is a mutant, like the X-Men, who has the power of a squirrel and can talk to her fury compatriots. She fights the strongest of the Marvel Villains and always win.
Humor is the focus of Squirrel Girl which sees Doreen start college and fight Kraven the Hunter.
Other Marvel heroes and villains are set to appear in future issues.

Squirrel Girl was created by writer Will Murray and legendary artist Steve Ditko. She made her first appearance in Marvel Super-Heroes vol. 2 #8 in a story titled "The Coming of ... Squirrel Girl" (Winter 1991). In the issue Squirrel Girl ambushes Iron man in the hopes of teaming up with him, she  ends up saving him and defeating Doctor Doom.
Squirrel Girl was also a member of the Great Lakes Avengers.


So to sum it up: mutant powers, check; former member of the Avengers, check; defeated many Super Villians, check; appearing in her own series, check. So what are you waiting for get out there and buy    The Unbeatable Squirrel Girl, you might as well get the variant covers while your at it.