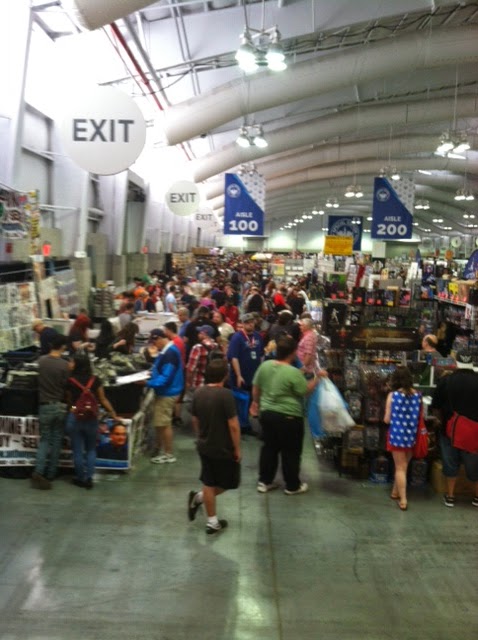 So early today we spent the day hunting and gathering at the First Annual Special Edition NYC, a comic convention that is the new born little brother to New York Comic Con.
The show is held at the Jacob Javits center same as the NYCC except that Special Edition is limited to the area Artist Alley so about 1/4 the size of its big brother. There was also a lot less people there, which made it easy to maneuver around the floor.  Do not let the size fool you, Special edition was a comic convention for comic book collectors, basically a hunters paradise.
By the time I left the floor my bag was so heavy from all the stuff I found I could barely carry it anymore. That was just the comics. I also scored some awesome sketches from three of the many artists that were in attendance. Prices were much better at Special Edition because the tables where cheaper for vendors and artists. There were so many dealers that if you went through every one you'd be there until Tuesday of next week. Added to that there was an even grouping of high grade golden age comics, a hunters best friend, and dollar bins, best used for gathering.
As part of my spoils rom this monumental hunt, I picked up an entire run of Mister Miracle Vol. 2 or a $1 a piece, I am a sucker for the late 80's early 90's stuff. Also filled in some Golden Age Flash issues and some Marvel Invaders. I will be going into detail on some of my spoils throughout this week.
My advice in you are in the area or can get there tomorrow GO TO THIS CONVENTION and bring $$$$. If you cant make it plan to go next year. I ill be there again. #Jointhehunt
Special Edition NYC Grade= A+
Keep up more news on the convention.
Good luck in your hunt.
Next Up Wizard World Philadelphia.