Special Edition: NYC - The spoils of the hunt, .25 cent edition!! 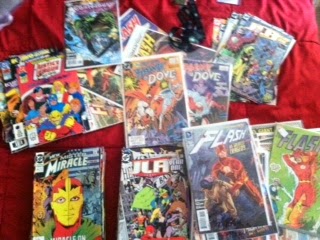 The hunt at this weekends Special Edition:NYC was one of the most successful in a long time. I have been going to conventions for many years and conventions have begun to evolve into Pop Cultural events, there is nothing wrong with that, but as the pop culture takes over more space the comic books take a back seat (less space). Special Edition was different, comic books as far as the eye could see and past them were comic book creators. Very similar to the conventions from many years ago, those of us that are older hunters have missed.

Walked away with 72 new comics gathered for the collection, I would call that a highly successful hunt.

As mentioned in previous posts, my collection consists of many titles from the late 80's and early 90's, plus a ton of Flash comics. I spent about half the convention shifting through comic boxes, dollar boxes, $3 boxes, quarter boxes (yes 25 cents) and higher value silver age boxes. Convention are the best place to get deals, vendors want to sell and the more you buy the better the deals ( think I read that somewhere before).
Here is a breakdown of what we gathered from the .25 cent boxes: Incase your counting that is 25 issues for 5.50(Hawk & Dove mini series counted as one issue).
Paid the man $5 what a deal.

I have been building the Impulse for about two years spending about $2-$4 an issue, up so this was a score.

I always grab extra Justice League stuff because I have always enjoyed the DC team up stuff, big Superfriends fan.
Hawk &Dove is another title I have been planning on rebuilding so here was a good start, issue #1 and complete mini-series with Liefeld art.

You could be happy with just this group but there is more to come, will discuss the dollar boxes in my next blog and then work our way up. TO BE CONTINUED...

Good luck on your hunt! #jointhehunt