I always enjoy just seeing a Flash #105, it is one of those issues I just always keep an eye for in the hopes that one day I will own a copy.

At Special Edition: NYC I saw an in graded copy for $800. Then as I was walking around Wizard World - Philadelphia ther was a 5.0 (Very Good/ Fine condition) for $1,550, the vendor has had this copy for over a year. Guess I'll save my pennies.

Released in March, 1959, this issue is important because it was the first self titled issue of The Flash in the Silver Age, which by the way the Flash actually started with his first appearance (Barry Allen)in Showcase #4. The Flash began the new age of Superheroes and they were now mixed with science fiction. 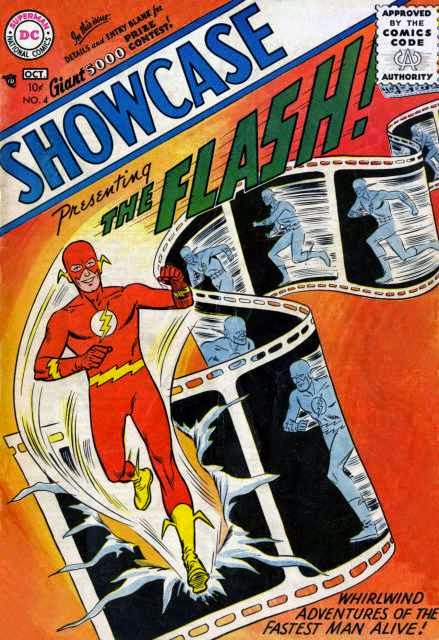 The Flash getting his own title just confirmed superheroes were back. One might asks why issue #105  not #1, to answer that question you have to look back to the Golden Age Flash, Jay Garrick.

Jay Garrick was the original Flash and his comics, yes he had multiple titles and they sold extremely well during the Golden Age of comics. As the age came to an end so did Flash Comics with issue #104. Keep in mind comic publishers saved money when they used existing postal licenses so #105 made sense, kind of. 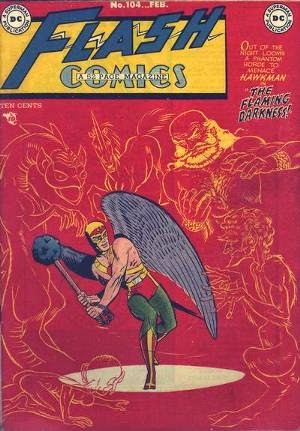 The Flash #105 had art by the late great Carmine Infantino, story by John Broome, both had worked on the Golden Age Flash as well. There were two separate stories in the first issue.

The first story was titled Conquerer from 8 Million B.C.  The villain was Katmos, who never appears again. Katmos is is the sole survivor of a metallic race that ruled the Earth 80 million years ago, who uses his mind control gun on an archeologist to free him. His plan is to try to take over the world, but he needs to steal some devices to do so. The prehistoric humanoid battles the Flash, who he captures and places in sealed tube which will cause Flash to be 1,000 times heavier than normal. The Flash gets free, battles Katmos and wins. Yes the Flash wins.
Lots of science fiction in this first story, time travel, scientific devices and prehistoric man (huh).


The second story introduces a new criminal who would become one of the Rogues, a group of Flashes greatest villains. Mirror Master robs a bank using his special mirrors the he found in prison. Barry Allen, the Flash, happens to be in the bank at the time and he notices something strange. Mirror Master has used his mirror technology to duplicate the bank manager, who is acting strange.
The Flash follows the manager and soon finds the Mirror Master's various mirror traps, he battles some creatures that he defeats. The Flash then finds the Mirror Master. Who he battles and defeats. He quickly captures the crook and turns him over to the police.
Same as first story regarding the use of science and technology. This story is the better of the two especially because Mirror Master will become a key villain throughout the Flashes history.


This issue contained what made the Silver Age so much different then the Golden Age, the introduction of science and technology made superhero comics popular again, we owe this resurgence to the Flash.  So if you have some extra cash lying around, go on a hunt and find this key issue for your collection or as a gift to me for bringing you all this comic information.

Good luck in your hunt!
#jointhehunt.