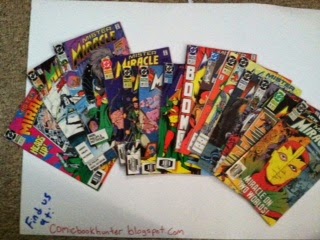 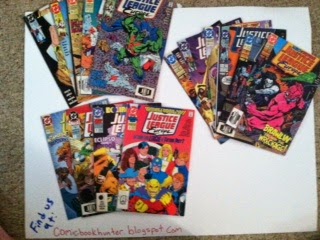 Was able to fill in another issue of the Wally West run of the Flash for $1, I actually purchased the India version of this issue a couple of years back (more on that in a future post). I having been working on putting this version of the Flash together for three year. It is the perfect example of the quirky comic book writing of the late 1980's/early 1990's.

I loved the Invaders when I was a kid, it was a nostalgic look back at the early days of Marvel Comics, called Timely back then. If you don't know this World War II superhero team,pick up an issue(at the next convention in a dollar bin). It stars Captain America, Submariner, Hman Torch (original) and sidekicks, Bucky and Toro. Great WWII references. Have decide to recollect the run but only at minimal cost. Good start!

Justice League Europe is another great example of the 1980's stories, funny and with some political meaning. Also stars Wally West as the Flash. Lots of comedy throughout these issues. If you like the fridge DC heroes this is a title you should read or re-read if you are old enough to be able to remember it when it first hit the spinner racks.

Finally 16 issues of Mister Miracle, the trifecta in the comedy laced titles of the 80's/90's (as you can tell I have a fondness for this time period in comic history. Mister Miracle is not a very popular character, he is the son of Darkseid but is a good guy. He is married to Big Barda a former assassin for Darksied, lots of couples humor (more relavent to me now then when I was a kid). Lots of New God references. Worth every dollar I spent. Used to buy this every month at Ye' Olde Comic Shop (that's what we called comic shops in the 1980's).

Hope you enjoyed my travel back in time but this is what $1 bins are good for, old titles which time forgot. Still good titles and worth taking the time to hunt down and read. $1 are for both hunting and gathering.

Next up the $3 bins, which are a bunch of variants.

Good luck in your hunt.
#jointhehunt
Posted by NY Crush at 3:39 PM