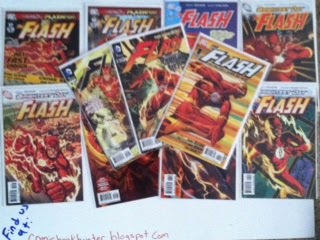 Today in our continuing review of the Special Edition hunt, the little brother of a convention that was a big success (See previous posts of the .25 bin and $1 bin finds). Spent some time going through the $3 variant bin. This bin contained only variant covers from the last couple of years. Variant covers are a trend started in the early 1990's to help sell more comics, basically an issue of a comic comes out with multiple covers. In recent years there is a common cover found at every comic shop, a second cover with different art that is available in lower quantity usually 1 for every 25 of the common cover and finally an extremely limited black and white cover usually 1 for every 100 common covers. I only collect variant covers from the Flash. The 1:25 sell for between $10-$15, while 1:100 sell for over $50. $3 a piece is a GREAT deal for these so I couldn't resist.

Yes over the last 8 years there have been 4 different Flash titles each following a different storyline.

The Flash: Fastest Man Alive began in June 2006 shortly after the cancelation of The Flash Vol. 2. The story arc focused on Bart Allen (Impulse) taking over the reigns of the Flash. The variant #1 cover was done by Andy and Joe Kubert.

In 2009 The Flash: Rebirth hit stands if brought Barry Allen back to the DCU, he ws killed diring Crisis of Infinite Earth in 1986. This series  by Geoff Johns and Francis Manapul started as a tie-in to DCU crossover Brightest Day, later issues focused on another DCU crossover with Flash as the central figure, this was called Flashpoint. #1 variant cover by Tony Harris, #2  by Ryan Sook, #3 Scott Kolins, #4 by Greg Horn, #7 cover by Darwyn Cooke, #8 Stanley Lau, #10 Ed Benes, and #12 Francis Portella.

Following the outcomes of the monumental Flashpoint storyline, which retooled the entire DCU,The Flash was again in a new title. this one has Barry Allen as the Flash and was anchored by Francis Manapul and Brian Buccellato. Variant covers we found at the convention were done by #8 Bernard Chang and #9 Tony Daniels.

As you can see variant covers are just another way to enjoy different artists interpretation of a comic character.

Next up the big money Silver Age bins.

Good luck on your hunt.
#jointhehunt
Posted by NY Crush at 3:00 PM