Flash Comics #1 - One of the Rarest Comics

We have been discussing in recent posts which comic would be the fourth most important. See those that we have looked at already, Which is Fourth?


Flash Comics #1 is one of the legendary rarest comics in the world. Published in January 1940, Written by Gardner F. Fox, penciled & inked by Harry Lampert, Flash Comics #1 featured the first appearance of the Flash, along with the first appearance of Hawkman. It was printed in a very limited number of copies, and over the years has become sought after by collectors.

Like most comics of the 1940's Flash Comics was an anthology book, it contained an assortment of different stories which contained different characters.
Here are a list of the stories contained in Flash Comics #1

"Origin of the Flash", Written by Gardner F. Fox, penciled & inked by Harry Lampert. This 15 page story sees The Flash face the Faultless Four, who have kidnapped Joan Williams' father. We also see how Jay Garrick becomes the Flash.

"The Origin of Hawkman", Written by Gardner F. Fox, penciled & inked by Dennis Neville. A 12 page story that is the first appearance of Hawkman, in the story weapons collector and research scientist Carter Hall discovers that he is the re-incarnation of an ancient Egyptian. Shires Sanders who would become Hawkgirl also makes her first appearance in this story.


"The Kidnapping of Johnny Thunder" Written by John B. Wentworth, penciled & inked by Stan Aschmeier. 10 page story about Johnny Thunder.


"The Origin of the Whip"  Written by John B. Wentworth, penciled & inked by George Storm. 10 page story about the Whip,  Rod Gaynor decides to take on the guise of the Whip a famed adventurer from the past in order to help the poor from unscrupulous viglantes. 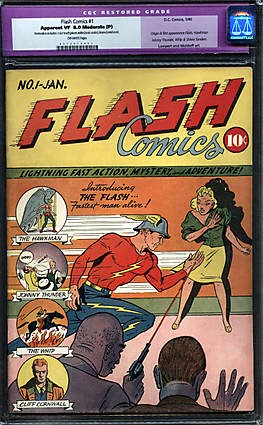 This issue contains the first appearance of three key DC comic characters, The Golden Age Flash, Hawkman and Hawkgirls secret identity. One of the most important comics in history but is it the fourth most important. You tell us? Leave an opinion below or email us at Farleyclan003@yahoo.com