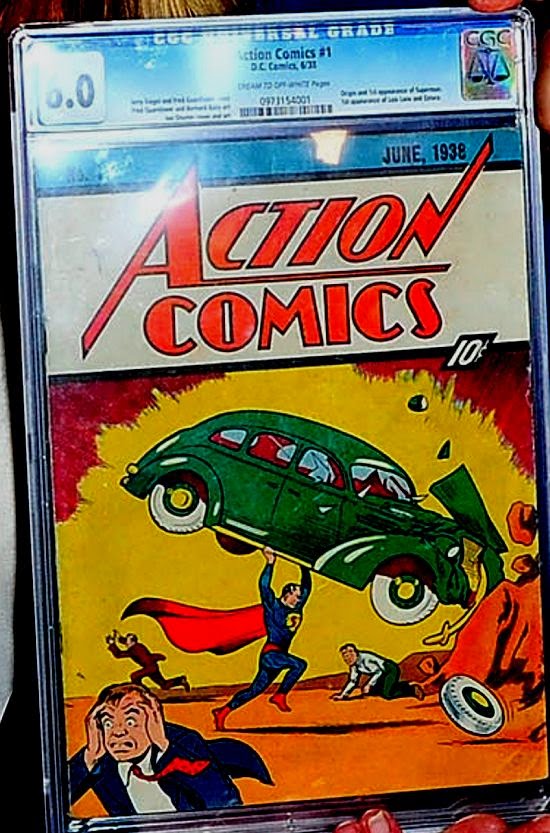 We continue our stories of Actin Comics #1, following our look at The Nicolas Cage copy and the The One in the Wall,we will look at the Jack White copy.
If you didn't already know, Jack White is most famous for being one-half of the rock group the White Stripes. He recently released his first solo album Blunderbuss.

It is believed that Jack obtained his copy through a ComicConnect auction back in 2009 for the then record price of $317,200. The CGC grade on this copy is a 6.0.

Last year Jack loaned his copy to DC entertainment for a party at San Diego Comic Con  celebrating the 75th Anniversary of Superman. While most people were caught up in Man Of Steel director Zack Snyder, Man Of Steel star Henry Cavill and DC editor Jim Lee also appeared at the party. When asked abut loaning his copy to DC Entertainment for use at the event, White said, "Action Comics #1 is an important piece of history. Instead of keeping my comic locked inside a vault I want to share it with fans during key moments like Superman's 75th anniversary, much like fine art is shared in museums." At the event Action  Comics #1 made a grand entrance being delivered by a Brinks security truck. The comic was displayed in a special, "speeding bullet-proof" display case made specifically for the event, allowing guests to get an up-close look at what many consider to be the most valuable comic of all time.

Events such as this just add to the legacy of this issue and helps us continue our stories of Action Comics #1.

Good Luck with Your Hunt!
#jointhehunt