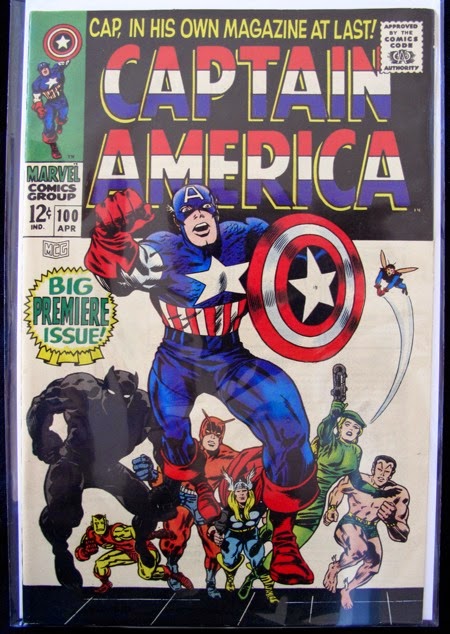 What better way to salute the troops then with the best known soldier in comics 1st issue of his Silver Age series , Captain America #100.

This first issue hit newstands in April 1968, it retells his first Silver Age apperance from Avengers #4 ( both issues are key Silver age book, hunt them down).
Black Panther guest stars in the story "This Monster Unmasked!" Which was Scripted by Stan Lee, penciled by Jack Kirby, inked by Syd Shores. Issue also includes a brief Nick Fury appearance and cameos by the Avengers and the Sub-Mariner. This story continues from Tales of Suspense 99. Cover price $0.12, a mint condition issue will now cost you $6,000.

Captain America is not only one of the popular superheroes in comics today but he is also a soldier himself. We picked this issue to salute the troops and to celebrate the 4th of July, because Cap is the embodiment of the USA and its military. In his early days he fought Hitler and the nazis throughout his pages.

Good luck on your hunt!
#jointhehunt!