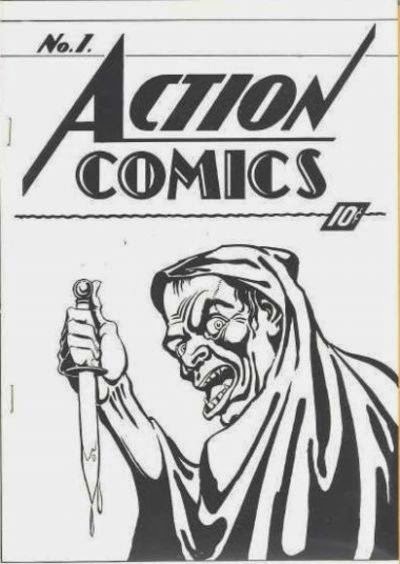 Okay first off many of you may be asking, what the hell is an Ashcan? Back in Golden Age of Comics, companies would have to create a faux comic in order to get the name of the title licensed with the US Patent & Trademark Office (USPTO). The publisher would create the title logo and place it on a piece of cover art, so they would own the trademark rights to the logo. This cover would be affixed to an existing comic book interior or just random pages. This was accepted as an authentic comic and the title rights were secured. There were a couple of these ashcans created for each title, afterwards they were usually thrown away.

The Action Comics #1 Ashcan was created in 1938 to garner the rights to the title Action Comics.  Superman does not appear on the cover. if you recall from our   Stories of Action Comics #1, Superman was a last minute throw in.
The Ashcan cover was a gruesome monster done by artist Craig Flessel. It was rare for Ashcans to use or initial cover art, usually recycled images were used. It is believed that only 3 Action Comics Ashcan copies exist, one is in the permanent archives of DC comics, while the other two are in the hands of private collectors. One recently sold for about $20,000.

Even just seeing an ashcan is a rarity, some come up for sale on occasion but that is rare. Keep on the look out for one as you never know where you might find a copy.

You can purchase a copy of the cover, along with Siegel and Shusters Slam Bradley art for only $35, check it out HERE 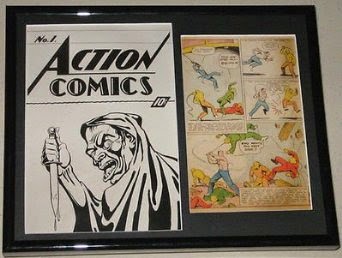 Good Luck on Your Hunt.
#jointhehunt