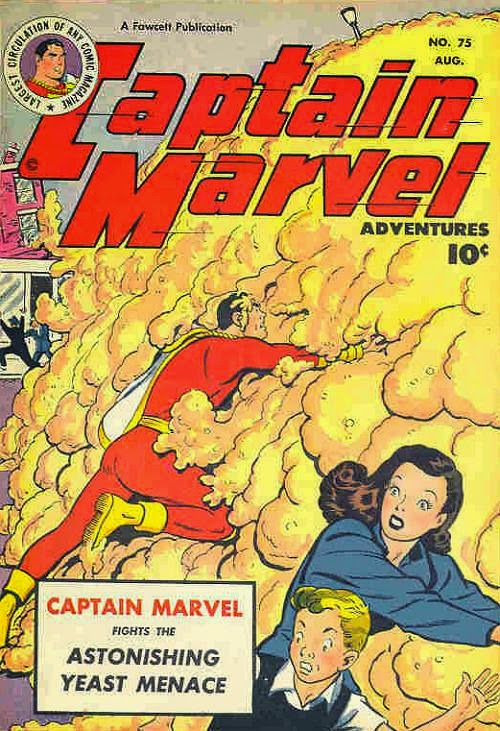 Sometimes the cover of a comic book just captures the essence of not only the issue in hand but also the character which stars in the issue. Think of some of the great 1940's Captain America issues.
Captain Marvel #75 does neither of these, why you might ask? I do not think fighting a big pile of yeast, yes yeast, makes for a menace or is it astonishing.

With a great selection of villains, such as, Black Adam, Mister Mind, and Captain Nazi why did Fawcett Publications decide to go with yeast as the main villain. Fighting a huge pile of yeast is bad enough using it as the selling point on the newsstand makes for one whacked out cover. We have chosen this cover because it confuses us and raises many questions. Was yeast a big threat in 1947?  Did they run out of ideas for villains? Did they have to use 75% of the cover to show the yeast? Eternal question which can only be answered by cover artist C.C.Beck, who we can thank for a whacked out cover.

If your looking to hunt this issue down it can be found for a couple of hundred dollars, but I recently saw one in fine condition for only $30. You can own one of the whacked cover stories for three ten dollar bills, what are you waiting for?

Brief history lesson on Captain Marvel:
Created by Fawcett Comic in 1940 based on the success of DC Comics Superman Captain Marvel became the top selling comic book in the 1940's. His rise to the top was attributed to the fact that Captain Marvel is actually Billy Batson, a young boy who when he says the words "SHAZAM!" turns into a magical superhero.
Unfortunately for Fawcett, DC comics felt that the character was to similar to Superman so they sued for copyright infringement. Fawcett was forced to cease publishing Captain Marvel-related comics in 1953. In 1972, DC licensed the Marvel Family characters and returned them to publication, acquiring all rights to the characters by 1991.

Whacked cover of the week and a comic history lesson all in one post.
Enjoy your hunt!
#jointhehunt