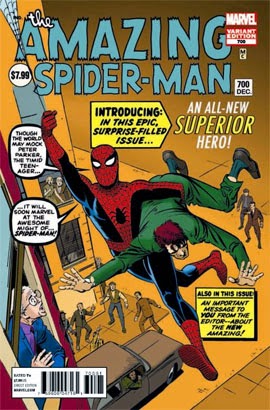 Variant covers have become all the rage over the last couple of years. Instead of one cover for a particular issues you get a few different cover, some more limited in distribution then others. So there are rare and there are super rare.

Amazing Spider-Man #700 featured the death of Peter Parker and was the last issue of Amazing Spider-Man. Okay he is alive again but death in comics isn't the same as the real world. This issue had 10 variant covers.


One of the variant covers was by Steve Ditko.You might be thinking, wow that is great Ditko is a legend in comics. But what makes this cover so special is that the it is axtially unused art from the first appearance of Spider-Man in Amazing Fantasy #15. This art had been reprinted previously (Marvel Tales # 137), but it has never been used for a cover and is over 50 years old. There were only about 800 of these covers sold so its rare and sells for about $500. 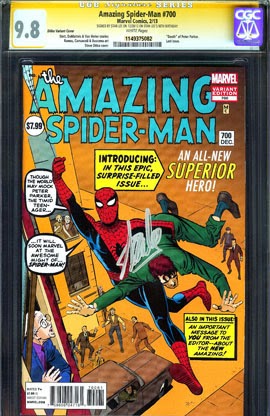 The variant of AS #700 is rare but they made a rarer version. the story goes, on Stan Lee's 90th birthday (December 28, 2012) Mr. Lee signed around 99 copies of the Ditko variant cover. thesesigned issues were then graded on the Signature Series program at CGC. The things that makes these graded comics so rare is that CGC decided to give these comics special commemorative label text. If you can find one of the 99 expect to spend upwards of $1,000

So get your hunting boots on and go find yourself a copy of these rare Spidey issues. Keep an eye it for the other 9 variants as well.